As a veteran master technician who has seen and repaired countless automotive failures, Jim Hetherington isn’t quick to believe in simple fixes without thorough evaluation. So when Sea Foam hired the Twin Cities-based consultant to test Sea Foam Spray, claiming the product could resolve problems tied to the notorious buildup of carbon deposits in gasoline direct injection (GDI) engines, Hetherington’s reaction was what you  might expect. “You have to prove it to me,” he said. With a dyno-mounted GDI engine and a 12-ounce can of Sea Foam Spray, he would ultimately prove it to himself.

Developed to improve fuel economy, emissions and overall performance through the measured injection of fuel directly into engine cylinders, GDI engines have seen a dramatic increase in use during the last decade. They were installed in 45 percent of cars and light trucks sold in the U.S. in 2016, up from less than 5 percent in 2008.* And GDI fuel systems are expected to become even more common as vehicle manufacturers look to meet tightening federal fuel economy and emissions standards. But despite its success, GDI has some drawbacks.

“The biggest problem they’ve had is with these carbon deposits on the back of the valves,” Hetherington said. “They’ve been trying to eliminate that through a variety of different methods. Some of it has literally been reprogramming the computers on the cars.”

In a GDI engine, cleansing gasoline detergents do not reach behind the intake valves, allowing buildup of carbon deposits that can lead to valves that intermittently stick or don’t allow for proper airflow to the cylinders. That can create a loss of power, rough idle, hesitation, misfires, a drop in fuel economy and other problems.

It’s not unusual for issues related to carbon buildup to be misdiagnosed as faulty plugs, ignition coils or fuel injectors. Replacing those components, or reflashing the ECM, are common. But those efforts just waste the time and resources of a shop, and result in unhappy comeback customers because the actual problem is not addressed.

When a proper diagnosis is made, walnut blasting or a complete cylinder head replacement are often thought to be the only fixes, but there is a far more affordable and less labor-intensive way to remove carbon deposits.

As Hetherington found out firsthand, Sea Foam Spray’s petroleum-based formula is engineered to quickly and safely remove carbon deposits from hard-to-reach places, including the intake valves on GDI engines. 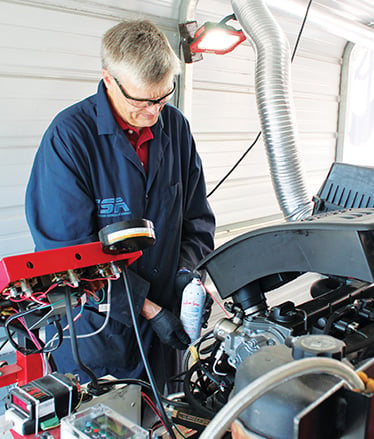 Hetherington used a 2.4 liter four cylinder Ecotec engine as his test subject. Fitted with all-new valves and a clean cylinder head, he ran the engine on 87 octane gasoline for 100 hours, or an equivalent of 6,000 miles, at 2,000 rpm to build carbon deposits. The valve valves were removed, weighed and photographed. Each valve had visible carbon present.

The engine was reassembled, brought to operating temperature, then while running again at 2,000 rpm, Hetherington emptied a can of Sea Foam Spray through the throttle plate, using the provided Hook Guide to get the straw properly placed without pinching or misdirection.

Once the can was empty, the engine was shut down to hot soak for five minutes, then restarted and run at a variety of loads to simulate a five-minute test drive. The head was then removed and the valves inspected, weighed and photographed again.

The findings: a carbon deposit reduction of up to 95 percent, enough to turn a skeptical technician into a true believer. An additional Sea Foam Spray treatment could safely cut the deposits even further – the company recommends as many treatments as needed.

“This is really consumer friendly and it’s easy to do,” Hetherington said. “By using the Sea Foam product, I’ll tell you this, techs can fix this problem correctly the first time.”